Teaching two puppies how to behave in a home at the same time proved to be a challenge.  Adding to the challenge was the returned little boy’s fear of people.  Porky, by the way, was quickly dubbed “Rusty.”

Because Rusty was less afraid of us when we were sitting down, I spent a lot of time sitting or laying on the floor those first few days.  Between that and asserting ourselves as leaders, Rusty began to trust us.

As it turned out, this timid dog was a great playmate for Gambit from the get go.  Rusty enjoyed playing with Nellie and Gambit. 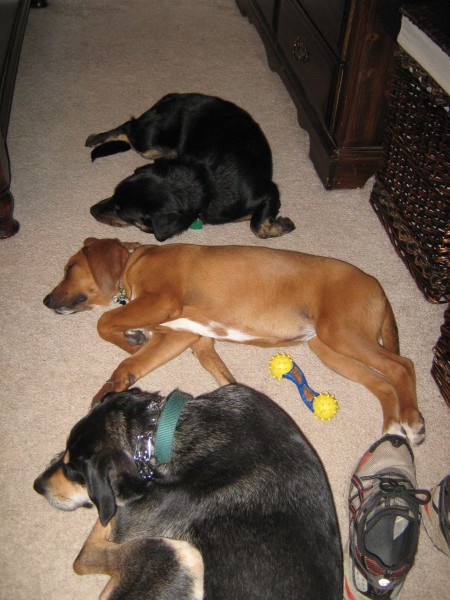 They also enjoyed cuddling together

When playing at the dog park those first few weeks, he was able to completely ignore all the people standing around.  He’d whiz right by them, running as fast as his little legs could take him.

It’s amazing how quickly this little guy who was scared of humans could transform into a happy, outgoing dog when other dogs were present!

Ventures into fosterhood
View all posts by Couches for Breakfast →
This entry was posted in Rusty and tagged Adoption, Animal welfare, dog, Pet, puppy. Bookmark the permalink.

1 Response to Learning to Trust