Those who follow us on Facebook have already heard of this little guy briefly.  While I promised a post on him this week, I felt compelled to put it off until there was some semblance of an ending.

On Monday night last week, we were heading home from Eddie’s training class.  While his reacted to other dogs only minimally throughout the class (yay!), he’d had a couple incidences of barking that night.

Thirty miles from class and twenty miles from home, we spotted a dog in a church parking lot and turned around to see if it had tags.  He didn’t, and we underwent a stressful and eventful 30-60 minute adventure of unsuccessfully trying to locate his home.  When we found it, vets offices were closed, as were shelters.

In my little car with Eddie hanging out in the trunk – his favorite spot to go when I fold down the back seats so he can lounge – there wasn’t anywhere to put the little dog except at my feet in the passenger’s seat.  I spent the next 20 miles tossing kibble to Edwin as a reward for being quiet.  It turns out that our kibble is doggie treat gold.  The boys are more motivated by their kibble than any delicious treat.

Eddie did start making a little noise if the little guy looked his way.  Fortunately, if I held the Patricia McConnell booklet I was reading in front of the little guy’s eyes, Eddie decided he wasn’t really there and promptly went back to snoozing.  To be fair, his eyes had a sort of stare-y look by nature.

The dog was a little brindle bulgy-eyed guy who clearly had a home.  He was neutered, had soft paw pads that had probably never hit the pavement before, trimmed toenails, clean teeth, was housebroken, and loved people.  I’m pretty sure he was some sort of little designer “breed” like a pug/Boston terrier mix, which is apparently called a Bugg.  His tail looked like it had been broken in the past, but it didn’t bother him and apparently could just be a Boston terrier trait.  He didn’t seem to have training beyond housebreaking, but was still pretty well behaved.  We called him Little Guy or Little Gremlin, because any unnamed animal that passes through our home gets dubbed something and it is never well thought out. 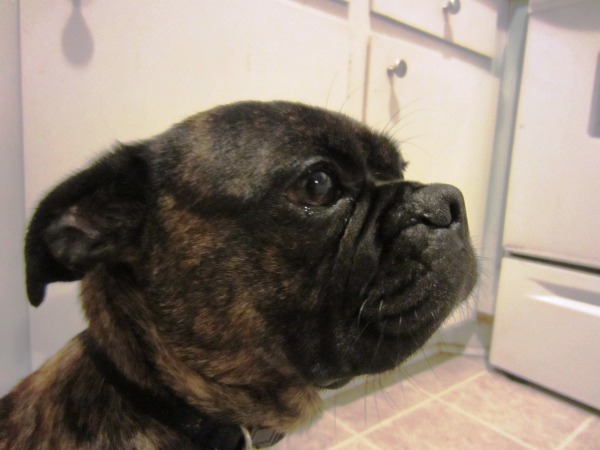 Our apartment is not set up well for separating dogs, especially in the Southern summer heat with one window A/C unit.  While I e-mailed vets, shelters, etc. that night, we kept one in the crate and the other in the bedroom or leashed to the bed. Little Gremlin wasn’t interested in playing with Gambit, which is pretty normal for fosters on their first day, but had no qualms with other dogs.

It did give me the opportunity to try out an idea we hadn’t used before.  We’ve been working on “look” for months with progress, but that progress has been somewhat slow.  Instead, kibble fell from the sky when Eddie stayed quiet, relaxed, or looked in Little Gremlin’s direction without reaction.

This was coupled with praise as usual, and was very effective.  Not to say that we had zero incidents with a new dog and Eddie both stuck in a teeny tiny apartment, but this is far from the behavior we would have seen a year ago.  He did even more wonderfully in his crate, which is one of his “safe spots.”

We agreed that due to the logistical issues presented by our apartment, we couldn’t handle the little guy beyond the next afternoon.  This was mostly for Edwin’s benefit – while we were presented with an opportunity to work on his reactivity, we didn’t want to put him over his threshold or be stuck without free reign of a room for days on end.

The next day made me really wish that all dogs wore tags any time their owners were present, but more on that Monday.

Ventures into fosterhood
View all posts by Couches for Breakfast →
This entry was posted in Uncategorized and tagged dog, Dog reactivity, Dog tags, Lost, stray. Bookmark the permalink.