Posted on October 31, 2013 by Couches for Breakfast

Nearly three weeks ago, we finally got the results for Gambit’s DNA test, which we won in a giveaway from Oh My Dog! over the summer.  Unfortunately, life’s been getting in the way and we haven’t had time to share!

The big question all along has been, is Gambit really a Dobie hound?

For a long time, we’ve believed that Gambit is part Doberman.  He’s annoyingly brilliant, energetic, affectionate, stubborn, dominant, and a good guard dog. has super long straight legs, deep chest, slim build, tiny paws (Nellie’s must be nearly twice the size of his, and she’s only an inch taller!), a thin coat, well-defined cheekbones, and loathes cold weather.  As an afterthought, he’s also black and tan, but it’s a very light tan with less definite edging at the back of the legs and the chest than on a Doberman.

Oh, and then there’s the fact that we’ve seen him next to an uncropped Dobie before.  Whenever that’s happened, he looks exactly like a smaller version of them with a curly tail.  There is no standard for Doberman tails since they’re typically docked – which means sometimes they are curly like Gam’s. 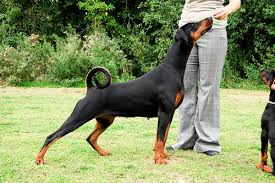 The DNA markers found by the Widsom Panel 2.0 DNA test indicated that Gambit is not at least 1/8 Doberman.

So what was on that list of 5 potential breeds that make up 50% of Gambit’s DNA?

Once again, not Doberman.

So maybe our Dobie hound isn’t really a Dobie hound!  Then again, genotype and phenotype aren’t the same, so it’s possible that he could be the teensiest bit Doberman yet exhibit a number of Doberman characteristics.

Oh, and then there’s this mind blowing article – recent findings on human DNA that make me question the validity of DNA testing in humans.

Ventures into fosterhood
View all posts by Couches for Breakfast →
This entry was posted in Gambit and tagged DNA, Doberman, Gambit, Wisdom Panel. Bookmark the permalink.